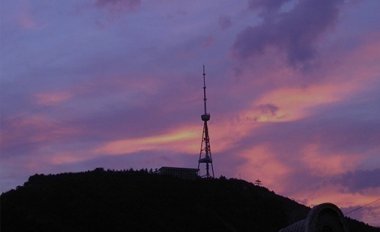 Information on construction processes of ground-based digital and TV broadcasting network
As communication technologies developed, the world has observed more effective possibilities to utilize frequency resources. For this very reason, most developed countries enjoydigital broadcasting instead of analog broadcasting system. The relevant decision of the International Telecommunications Union (ITU) and EU envisaged the switch to ground-based digital broadcasting from analog by the European countries including Georgia till June 17, 2015 and the relevant processes are underway according to the Georgian Law on Electronic Communications and Relevant Recommendations as well as the action plan of switching to the ground-based digital broadcasting, approved as #208 decree of February 10, 2014.
In order to meet the aforementioned legislative acts, TV-Radio Center LTD created the one multiplex digital ground-based state television network. According to the decree #2157 (December 26, 2013) of the government of Georgia ten million GEL was allocated for increasing the TV-Radio Center capital. The process of switching to digital broadcasting represents a large-scale state reform, implemented in accordance with the government-defined action plan and recommendations.
Besides, according to #689 decree of the government of Georgia issued on April 14, 2014, with the aim of conducting events of state and social significance in restricted periods of time, Georgia’s TV-Radio Center LTD was permitted to purchase the international expert service and goodsaccording to simplified rules, by its own finances, in relation to switching to digital broadcasting.

The reform was aimed at:
Effective use of restricted natural resources, TV-Radio frequencies;
Media pluralism and freedom of expression;
Establishment of competitive environment on media market;
Providing consumers with diverse and high-quality broadcasting;
Development of informative society;
Attracting investments and establishing European standards.
The reform will promote establishment of new possibilities – the consumers will be able to plan watching the TV program they want to; enjoy the e-programs catalogue and reminder mode as well.
Audio description and subtitles will be available for persons with disabilities.
In accordance with the aforementioned #689 decision of the Georgian government Georgia’s TV-Radio Center launched simplified procedures to purchase the digital ground-based and television network construction service and e-mailed this information to all interested potential providers. Eleven companies got involved in the purchasing procedures as a result.
Georgia’s TV-Radio Center invited international expert-consultants in order to objectively, dispassionately assess the proposals offered by the service providers as it was of state importance. Taking the best practice into account by the experts, a complex system of the providers’ proposals was elaborated. It included the headend, TV programs and agency feed systems, arterial radio relay lines, all basic components of the network integration skill, offered engineering decisions, etc.
After summarizing all the evaluations provided by the foreign experts, the first three of the companies, the proposals of which did not exceed ten million GEL were determined as it follows:
G. Dat Service LTD; Veziri LTD; Integrated Georgian Systems LTD.
Under the presented documentation regarding the project budget (maximal upper limit – ten million GEL) the TV-Radio Center commission made a decision on July 16, 2014 to recognize G. Dat Service LTD as the author of the best proposal and signed an agreement with it on July 24, but the company was unable to present the bank guarantees on advance payment and fulfillment envisaged in the agreement, due to which on August 8, 2014, Georgia’s TV-Radio Center decided to terminate the agreement and supposed it was reasonable to cooperate with Veziri LTD, ranked 2nd in the first three of the companies, assessed by the foreign expert-consultants. Once starting negotiations with Veziri, it became possible to reach an agreement on using modern apparatus and equipment of the well-recognized TV-Radio companies ‘’Rohde & Schwarz’’, Kathrein” and “Alcatel-lucent”.
On September 23, 2014 an agreement was concluded between Georgia’s Tele-Radio Center and Veziri LTD. On October 7, 2014,the latter provided the Tele-Radio Center with the bank guarantee and launched construction of the television network.
Apart of that, under the governmental decrees #206 (February 10, 2014), #2157 (December 26, 2013), #689 (April 14, 2014), the Tele-Radio Center of Georgia conducted large works of accomplishment and construction of the ground-based digital television network infrastructure. In particular, 16 new towers and 2 TV towers were built for new radio-relay stations. Existing infrastructural constructions were renovated, incumbent towers were prepared, etc.

Veziri LTD fully realized the commitment to cope with the serious workin short terms, envisaged by the project. Having cooperated closely with us the company shortly implemented repeated protection of the microwave radio-relay lines, having taken the network sustainability requirements’ principles into account. Veziri LTD also ensured the head-office headend and gave orders to the following companies: “Rohde & Schwarz“ (over providing with television transmitters), RFS (on antenna-feed devices) and “Alcatel-lucent” company (on providing with necessarydevices of microwave radio-relay lines and equipment) and managed to get all this in short terms – in the first part of January 2015. It enabled Veziri LTD to launch practical construction works in January, current year. But it is also notable that the rest devices and apparatus were supplied as envisaged in the corresponding plan. The process ended in April, current year.

As far as it’s known, most part of the TV-Radio broadcasting network towers being under construction and their infrastructural constructions located at high mountain peaks encounterserious problems in winter. Sometimes, thick snow and severe frost cause compelling obstacles in terms of construction and installation works on them but due to the equipment and tools provided by the contractor companies without delay, as well as hard efforts in short period of time made it possible to turn the television transmitting stations on since March (current year) in Tbilisi, Kutaisi, Gori, Zugdid, Poti, Batui and entire Kakheti region. The simulcast analog and digital broadcasting period was launched this way.
At present the head office of the network (‘headend’) has been turned on and configured at the Tbilisi TV Tower. It provides multiplexing TV signals and provides them to the regional television transmitting stations via radio-relay lines. All this ensured spreading digital television signal to 90% of Georgia’s population.